Initially this was set up as writing blog, somewhere meant to be wordy and worthy and full of musings and plot bunnies.  Real life doesn’t work like that though, and I have a feeling I’ll be dropping all manner of stuff in here.

Like the fact my two eldest children (DD1 -12yo and DD2 – 9yo) are currently messing around on the piano and so far, I’ve heard snatches of the Harry Potter theme, a couple of grade one pieces and now, they’re figuring out how to play ‘Do(e) a deer’ from the Sound of Music together.  Very sweet, but it does get slightly repetitive after a while!

DD3 (8yo) is trailing around with her toy rabbit under one arm looking like she’s been dragged through a hedge backwards.  If I so much as mention the word ‘hairbrush’ however, she will vanish into the woodwork, like some ethereal woodland sprite.  DS, the four year old toad in human form, is somewhere glued to a screen.  Or the puppy.  Did I mention the puppy?  I guess one bonus is that the dog is now pretty much housetrained, which was a lot less painful than I was expecting.

On the house front, we now have a roof on the dining room and a floor to the bedrooms, and we’re halfway up the bedroom walls.  Yesterday I ordered some wallpaper for DD1’s bedroom.  Isn’t it pretty? 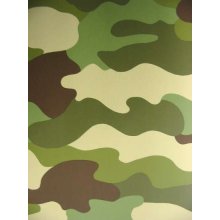 Yes, seriously, she wants camo wallpaper.  So, I’ve bought 3 rolls which should do the long wall in her room, and told her she can have the other three walls painted a pale sage.  Which, funnily, is the same colour as the kitchen is probably going to be 🙂

I do, however, still have three more children who want to choose their own wallpaper, the master bedroom, the ‘common room’ and the little dressing room (aka the box room) to decorate.  We’ve chosen plain white for the bathrooms, white suites, white tiles, and the bits that can’t be white are stainless steel/chrome.   The living room is going to be shades of red and saffron, to go with a painting we bought months ago.  The ‘music room’, which is basically my tv free little front room that’s going to be stuffed full of bookshelves and the piano, is neutral with splashes of dark red and bitter chocolate.  The kitchen will have white cupboards, a wooden counter and light sage walls.  But as for hall/stairs/landing, the other bedrooms, the dining room and study – I haven’t got a clue.  The concept of having a whole house to decorate how you want it is a great one, clean slate and all that.  However, in practice, it’s more than a little daunting.  There are only so many books of wallpaper you can go through before industrial sized tubs of magnolia start to look really appealing.