I have no words. Life, stress, Christmas – everything seems to be conspiring against me and what little time I’m getting to write just isn’t enough. I find myself staring at a blank screen and all that’s going through my head is the laundry list of stuff I have to do.

No pun intended, mind. But I’ve just enrolled at the University of Lincoln for an MA/postgrad in Creative Writing.

I feel a bit of a fraud, to be honest, sat here surrounded by all these beautiful young things with their whole lives ahead of them, but there’s a part of me that’s leaping up and down like a little kid. Learning stuff is ALWAYS awesome, and the fact I get to read and write, and talk about reading and writing with people who love the written word, is just too exciting to contemplate right now.

So I’m drinking coffee in this big Atrium and wondering what to do next. I might just go explore the library because there’s nothing like immersing oneself in one’s natural habitat.

Or I could just sit here and eavesdrop on the dozen fascinating conversations that are going on around me, right now. There’s so much material here, so much. People watching has got to be one of my favourite pastimes ever. 🙂

I’m getting the itch to write something new, as opposed to working on one of the ms I have lurking on my hard drive. For some reason, this has gotten me looking at the traditional romance novel tropes and clichés.

Most books contain at least one or two clichés, because by their very nature they exist in every day life. But the traditional Romance Novel (TM) is awash with them, simply because the very genre is based on a cliché. Boy meets girl, boy and girl fall in love, something comes along and threatens to keep them apart, everything is terrible and nothing will be right again, and then hurrah it’s all fixed and they live happily every after.

I want to include a couple of fun tropes in this story, so I’m working on my MC whilst keeping some in mind, and we’ll see which one attaches itself to her.

So many of these are a little creepy though – I always found the poor girl falling for the rich guy trope just wrong. She only wants him for his money, right? And he can buy anything he wants.

So yeah, maybe I’ll do this one the other way around. Rich girl, employs a gardener/driver/secretary. See how he likes being the kept man!

Studying is easing off, just one last big essay to do for the Level 3 module.  Am looking forward to it, because the book, A Monster Calls is stunning, even if it did leave me an ugly sobbing mess by the time I’d managed to finish it.

I’m not sure if it’s because it hit so close to the bone, or Patrick Ness’s writing is that good, or I happened to be hormonal that day – or even a combination of the three, but Conor’s situation is heart wrenching, and the way he deals with his mother being ill (note, nowhere in the book does Ness mention the words ‘cancer’ or ‘death/dying’) would make a stone cry.

Will upload pictures tomorrow, and maybe even start to ramble about the final essay. If I can stay off Twitter for long enough…

The woodburner is going full pelt, candles either side on the hearth adding a flicking light to the intense orange glow coming through the glazed doors of the cast iron monster.  On the aging rug which is pockmarked with a morse code of cinder burns lies the lurcher pup, nine months old and all sharp angles and wayward tufts of grey-black fur.  The room smells of wood smoke and cinnamon scented candles.

It’s quiet too, a rarity in this house.  The children are all upstairs, either doing homework or watching a video in the common room.  Yes, we have a video player and it’s used with much glee by the smalls – they think it’s the neatest thing ever which is amusing.  There are DVDs up there too, but at the moment, a Disney video of some description, snaffled from a charity shop at the seaside, is the favourite.

Down here, I have rice bubbling away in the rice cooker – a present to myself that might well be going back to the store as it has a tendency to burn the bottom half inch of rice into a solid, lightly browned mass before it switches itself off.  Not acceptable in this house, by any stretch of the imagination.  Rice is skyrocketing in price, and we eat too much of it to waste about a tenth of each panful.  Regular leftovers which are thrown to the chickens are one thing – inedible foodstuffs that we have no choice but to leave are absolutely not.  Eldest made curry at school today, so the kids will all eat that with the rice, and I’ll rustle up something of a vaguely Japanese flavour once himself gets in from work.  I feel the need to cook with mirin and sake and tofu and chillis and dashi and, oh hell I need a trip to London.  The Japan Centre isn’t all that far from Baker Street and I really want a day geeking out doing Sherlockian things.

Oh look, it took me not quite three whole paragraphs to get to Holmes.  That’s pretty good considering how all things ACD are currently taking over my life.  I have even purchased a sticker to grace the back end of my lil bus that reads “I believe in Sherlock Holmes”.  No doubt I will get a serious ribbing from Those Who Don’t Understand, but I believe and feel the need to proselytise to one and all.

This is my sticker: 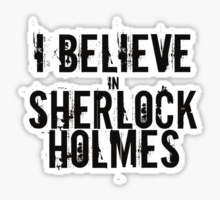 At the start of the year, I promised myself I’d read a book a week.  Right up until I had children, the thought of only reading a single book in a week would have filled me with horror.  It wasn’t unheard of to read three or four per week.

But then, life started to get in the way.  The interwebz began to develop and grow and I was oh, such an enthusiastic voyeur into this amazing virtual world which was opening up before me.  Windows 95 and AOL 2.0.  Children appeared and began demanding my attention.  I learned to nurse one handed so I could type or hold a book, but inevitably, a mouse was easier to manipulate single handedly than pages were to turn.

And suddenly, my youngest is four and I’ve fallen out of the habit of reading so much.  Don’t get me wrong, I still read more than most of my peers.  A lot of stuff gets read online (Google library, omg) but I began to yearn for the feel of paper and the smell of a new book.

To cut a long story short, I’m reading again.  I’ve downloaded a bunch of books onto the iPad and have gone through a few shelves in my mini library and dug out all the ‘to-reads’ that migrated onto there and were forgotten about.  So I have about a dozen books sat right here 🙂

Absolutely loved it – the writing style, the POV, the way the protagonist introduces himself gradually (no mirror scene here!) – and the whole premise was brilliant.  And he never quite does what you expect him to which is always good.  The voice is fresh and amusing, and I admit to laughing out loud on more than one occasion.

So, next is the sequel, Moon Over Soho

, which I’m hoping is going to live up to expectations.

And after that, this is my to read pile: 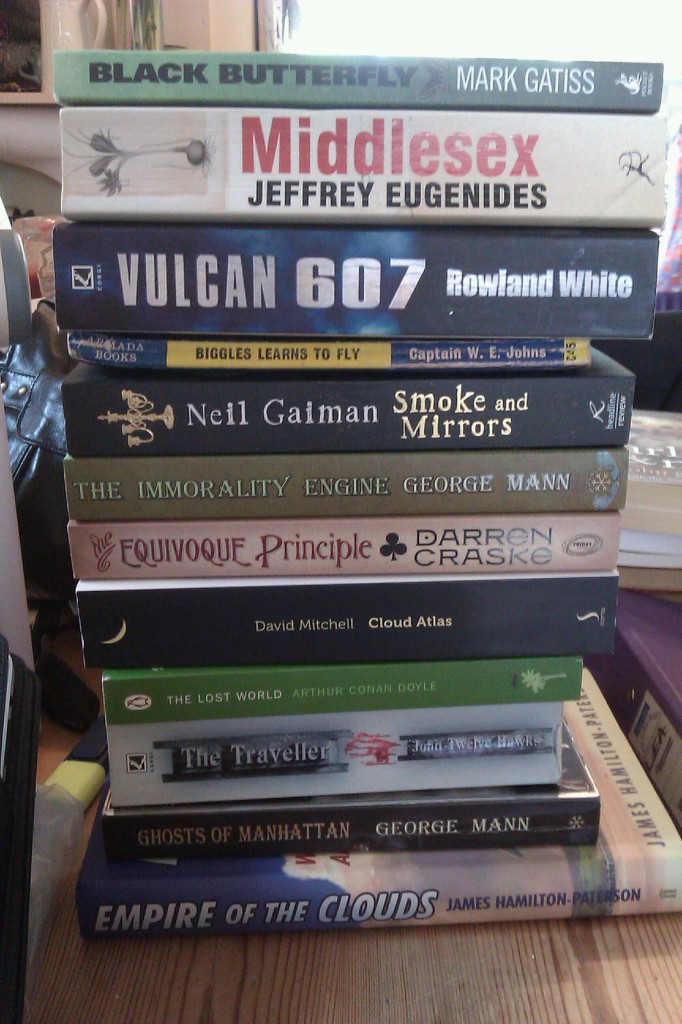 This is the recipe I used to make cinnamon buns at the weekend.  I tweaked it, as I always do, but it worked really well.  Notes are as follows:

They were very tasty though, and the dough cooks up to a deliciously soft bread.  Not on any diet sheet that I’ve come across, however!!

Just scared the living daylights out of DDs 2 and 3. Kicked their door open and it banged off the wall with an almighty crash, then proceeded to bollock them soundly about being complete and utter idiots when getting ready for bed. They’re 8 and 9. They should not need me there in the room telling them to put their dirty things in the laundry, their jeans on the dresser to wear again tomorrow, to put their pyjamas on and stop bloody god-damned fricking well messing around and squealing like stupid idiotic toddlers. DH is out doing house stuff and I’m having to do bedtime on my own. So whilst doing the boy, the middle two are winding me up. I was scolding them in a reasonable voice, and damnit if they weren’t still giggling at me.

Cue Momma losing her rag and kicking the (fortunately) solid wooden door. If it had been one of the veneer ones with the egg box filling, I think my foot would have gone through it. I think it did finally register that I was more than ticked off.

So, bad mother, yeah. Grumpy, grouchy mother, which is sad because I was actually in a good mood until I had to do something with those bloody lot. Still, they’re all in bed tomorrow at 7pm, and if we have a repeat, it’ll be 6.30 on Sunday night. Hopefully it’ll sink in before they’re going to bed after lunch!!

Have been looking back through old blogs which, by some miracle, are still on line and readable.  It’s quite neat, actually, how that snapshot of my past is there, for anyone to see should they bother reading a blog that was last updated in 2005.  Not even I could get away with doing the ‘sorry for not posting for a while’ blog post on that one!  There are two others linked off that old homeschooling blog – a gardening one and a reading one.   The gardening one has had one post since 2008 and that was because I was going to use it as my ‘house’ blog.  Yeah right, got really far with that one.  The last one I found is the Blogsome version of Mud & Mischief, which has a couple of adorable pictures of my little boy, who now isn’t quite so little.   Bless.

The extension is up to the eaves of the original house, which is exciting.  Heavy rain forecast for tomorrow which isn’t so good.  Then it’s bank holiday and the delays are really starting to chafe now.  Roof trusses arrive in a fortnight – two bloody weeks!!  *head/desk

However, they’ve got a ton of stuff to do inside, not least start on the rear dormer windows, so at least we should still be making progress.  Hoping to get the windows in the south side so we can finish my music/library/sitting room.  Still don’t know what to call it – the architect put it on the plans as music room, which is quite twee.   Here, have a nice big picture of the downstairs.  The original stuff is on the right, the dark heavy grey outlined bit is the extension – dining room, study and garage.